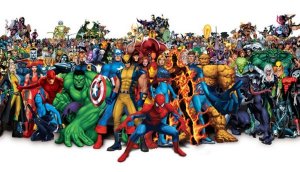 So, the reason I haven’t written in awhile is that I cannot decide what next to write about (or who).

My main thoughts were another author: John Eldredge or Brennan Manning; possibly John Piper, but it was really just his way of thinking “by enjoying Him forever” from the Shorter Catechism…

When I was 12 and 13 I read 9 comic books, and got what backdated copies I could find. I read Iron Man, Thor, the Amazing Spiderman (there were like 4 Spideys at the time, now there are like 51), XMEN, the Uncanny XMEN, XFORCE, XFACTOR… maybe it was 7 because that is all I can come up with. I have been saying 9 for 20 years now, but maybe it was 7.

I promise I will get back to real people, but I saw Iron Man 2 the day it came out and loved it – so I thought I would go ahead and write this post. Partly because War Machine was invented when I was reading the comics, but also because Tony Stark is a very real human – narcissistic, brilliant, but very dark and selfish also.

Mostly comic book folk solve their problems by punching someone or kissing someone. There are undertones, some good artwork, meta-themes (like oppression, the grand story of the unlikely hero, etc.), but as far as I can tell problems are solved by punching/kissing. I tried the second one to no avail throughout my teenagedom.

In all seriousness, I think I learned that ‘heroes’ have back stories, darkness doesn’t preclude light. Or something… Bad guys can become good guys by choice.

And, as a man, there was a pleasant amount of violence, speed, movement – of – story. It took me about 20 minutes to read a comic, and most of the time there was a good bit of closure.

As I get older I am less sure of what I know, but the world seems simpler. The Marvel Universe, without regard to the plots of villains, is a simple place. So, in addition to (literally) thousands of almost useless facts, the Marvel Universe presented a nice outlet, lots of explosions, and an appreciation of the real role of story in a heroes life – it is just a story, there are still choices and people on the other side.