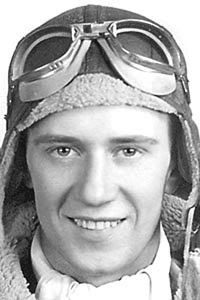 My grandpa was a WW2 Co-Pilot in a bomber (Claims Hitler gave up after he heard Jim Blazer had shown up), a salesman (mostly to industrial plumbing companies), played the stand up bass his whole life, had four children, and refinished furniture in his spare time. This is his flight school picture.

He is the kind of man whose relational weight will not be known this side of Heaven. His funeral was huge because he learned how to use his cell phone. And, as far as I can tell had lunch with every man in Northeast Oklahoma. He kept in touch with his flight crew his whole life, helped a distant second cousin with ancestry stuff for the Blazers, had lunch with his pastor every Sunday night for as long as I can remember (even after that Pastor built his church into one of the largest in the country). I believe he and Grandma began several support groups at their church – but I don’t know that that is blog-material.

He once took me aside and took five minutes to explain to me that my grandma is the funniest person he has ever met. It was a wonderful five minutes. I have since learned how true it is – my grandma can be funny through jokes, good-sarcasm, exaggeration, and pure silliness. My grandpa was more of a knock knock joke man. Last week my dad told me this joke. “I know two short jokes and one long one, do you want to hear them? (Do I have a choice?) joke, joke, jjjjoooooooooookkkkeeeeee.” If Geeps (my nickname for him since i was a kid) were still around he would be desperately trying to send that joke throughout Tulsa County.

There is more of course – more background, more about his father David E. E. Blazer (whose fountain pens are on my wall and whose business phone was 5 digits long), more about their kids… But mainly I remember consistency. He was at my spelling bee in 5th grade, and the legend is that he also mis-spelled “lightning” with me. I would have got it right had I asked for an example. I spelled it “lightening” as in “lightening in the load” ‘:} I ate at their house more times than I could count, stayed in their guest room frequently as a kid, always made him get out one of the 2-3 swords he had hanging around the house (or old Revolutionary War guns). Grandma and I played a lot of gin and scrabble, but Geeps was always there (usually in his recliner).

I appreciated him, loved him, miss him, wish I would have asked him to teach me more about refinishing furniture or how to play the stand up bass.

Geeps came to know the LORD late in life after listening to a televangelist – which really helps me to not hate them. I didn’t know him before that, and his faith was very shaped by Tulsa-Bible-Belt culture. But, I know that he knew the LORD, prayed for his family, gave away what he had, and loved as best as he knew how. Geeps and Grandma have had to see a lot of pain the past few years – probably no more than many of their age, but it was still hard. They were sometimes leveraged into bad situations they didn’t deserve to be drug into. But, this is what I know: 20 years after a divorce from my dad Geeps walked up to my mom and said, “Hey there pretty lady” as though no time had passed and nothing had gone wrong since they had first met in the mid-70’s. This was at my college graduation.

Once I was talking with another member of the family who was in pretty bad shape. I told him to stop posturing as a Christian, stop reading his Bible for awhile, and when he did read it to pray like the Psalmists who are so honest with God about their fears, hopes, anger, etc. The incident that led me to say this was warranted.

Geeps was 80 at the time and present for the conversation. He later told me he couldn’t sleep after what I had said, and that he got up later and read Psalm 88. I count that as one of the most spiritually humbling moments of my life. I am still amazed that the Holy Spirit would do that when I clearly have so much to learn about family, love, hard work, and faithfulness from Geeps.

He died in 2008. The nice suit I own I bought for his funeral. He would have been proud in a straightforward way. Not in the way that thinks I am more spiritual, but the kind where you are proud because you understand that this is clearly the vocation of your grandson and you are proud and wish him well.

There is always more to say. When I see Grandma I pick her brain about their early life, and about their stories. I am reading “The Greatest Generation” in hopes to understand the two of them a little more. I love and miss Geeps. Apparently I used to go up to him as a kid and say (all the time according to my dad and Grandma), “Hey Geeps, I have an idea, let’s get a book and read it!” Good thing Christians never really say goodbye I guess.