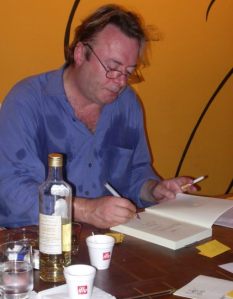 I got to have a drink with Chris Hitchens years ago because a good friend invited me to a dinner after one of his debates.  There are good articles out there so I won’t write at length.

Often when I tell this story or allude to part of it I am asked what he had to drink.  I believe he had a Scotch and Soda (Glenfiddich 12) with a splash of white wine on top of it.

Highlights of the evening: hearing him affirm Lewis’ argument about Jesus (that he has to be a lunatic or a savior: Hitchens concluding lunacy).  Then, hearing him summarily denounce the rest of Lewis’ writing (to a table full of people who think Lewis is maybe second to the Apostle Paul).  It was awesome because he didn’t say it disrespectfully, even as our jaws collectively hit the table.

As the evening round itself out I told him that if I were to become an Atheist I would want to be his kind of atheist.

A few years later when it became public that he was diagnosed with cancer I read parts of his Vanity Fair article.  His cancer was far worse than mine, but his description of the “fight” and of chemotherapy “venomous sack” is by far the best thing I have read on the subject.

For my part, I will miss him.

One response to “What Chris Hitchens Drank”