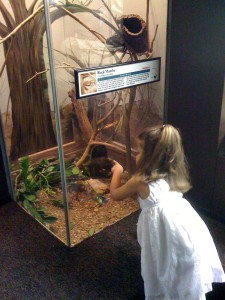 Rachel spent Saturday painting the house. This meant two things: One, I was with the girls all day (awesome) and two we needed to not be in the house in case there was a showing (sometimes awesome). So, we went to the zoo. There were highlights: we waited five minutes on the Black Rhino and he then came out. There were lowlights: we missed the Cheetah running by 13 seconds (twice).

But, in the insectarium was the story I have been asked to share. I always try to get to the back quickly, because if I want to look at bugs I can go to my windows or basement. But, at the back there is a butterfly house that is cold and full of butterflies – a winning combination to be sure.

As the three of us are walking Caroline tells me she wants Ariel. Ariel is a small doll of the princess, Ariel the ex-mermaid. I knew we had brought her in from the stroller, but we re-traced our steps back, watching the ground the entire way and Caroline becoming more and more panicky. As it turns out she was not panicking because I couldn’t find Ariel, but because she knew where Ariel was, but had forgotten to help me begin the search there. Ariel had been jammed into a Cow’s Skull in the insectarium. The skull houses a long centipede. I was not excited about this endeavor. There is glass between the bug and the eye, or in this case there was a bed of glass for our wayward princess. My hand was not fitting down either eye socket as Caroline became more and more frantic. I tried to use my keys. For what, I cannot exactly say but they appeared like a loose collection of tools in an otherwise hopeless situation, so I tried them. Nothing. Tried my pen. With my pen I could actually push Ariel. So, I stabbed her a few times out of spite.

This was when a nice young lady rescued us with her small hands. She pulled Ariel out and Caroline did her the amazing dignity of looking into her eyes to say thank you.

Then we hung out with the butterflies and went home. I also scared Julia to death trying to keep her awake in the car. It is so sad when you scare them so much they obviously forget to cry. And, this picture is of Caroline with the Black Mamba. Why does she love the Black Mamba? Is it because we let her watch Kill Bill so many times?